Gavin Kelly has put out the first ever edition of the paratexts of Sidonius’ panegyrics and carmina minora: ‘Titles and Paratexts in the Collection of Sidonius’ Poems’, in: Antonella Bruzzone, Alessandro Fo and Luigi Piacente (eds), Metamorfosi del Classico in età romanobarbarica, Nuova biblioteca di cultura romanobarbarica 2, Florence: Sismel–Galluzzo, 2021, 77-97.

Now announced by Liverpool University Press for publication on 1 November 2021:

Sidonius Apollinaris was an inhabitant of southern Roman Gaul in the mid fifth century AD, when it was threatened by invasions from beyond the boundaries of the Roman Empire and by competing warlords. His many poetic works include three panegyrics to emperors at the beginnings of their reigns; these are carefully translated and annotated, and provided with comment and synopses.  His multiple shorter poems, in a variety of metres, are translated into appropriate English and given separate introductions and notes of various kinds, historical and literary. There is an extensive and informative introduction to the whole work.

This book by Roger Green, a lifelong expert in Late Antiquity, gives a firsthand account of the political strife and manoeuvring of the times but also a vivid picture of the lives of his like-minded friends in an almost post-Roman episode of Rome’s existence. Sidonius was read widely in the Middle Ages, with a golden age in the twelfth and thirteenth centuries and also in the fifteenth century revival of Late Antique literature. Today his poetry will awaken new study and interest, without the archaism of many older translations and with a fresh and updated approach to many issues.

Joop van Waarden is to give a lecture at the Scuola Normale Superiore di Pisa on performance aspects of the Panegyric of Anthemius.

Mode: distance. Everybody is welcome. In order to participate, send an email requesting to be included in the Teams group to Fabrizio Oppedisano: fabrizio.oppedisano@sns.it.

On 29 June, Marco Formisano and Fabrizio Oppedisano will discuss Sidonius’ Carmen 1 in the online series Titubanti testi: Binomio di lettura. To participate, drop Marco an email at marco.formisano@ugent.be. Here is the programme of the series (new speakers are welcome from September): 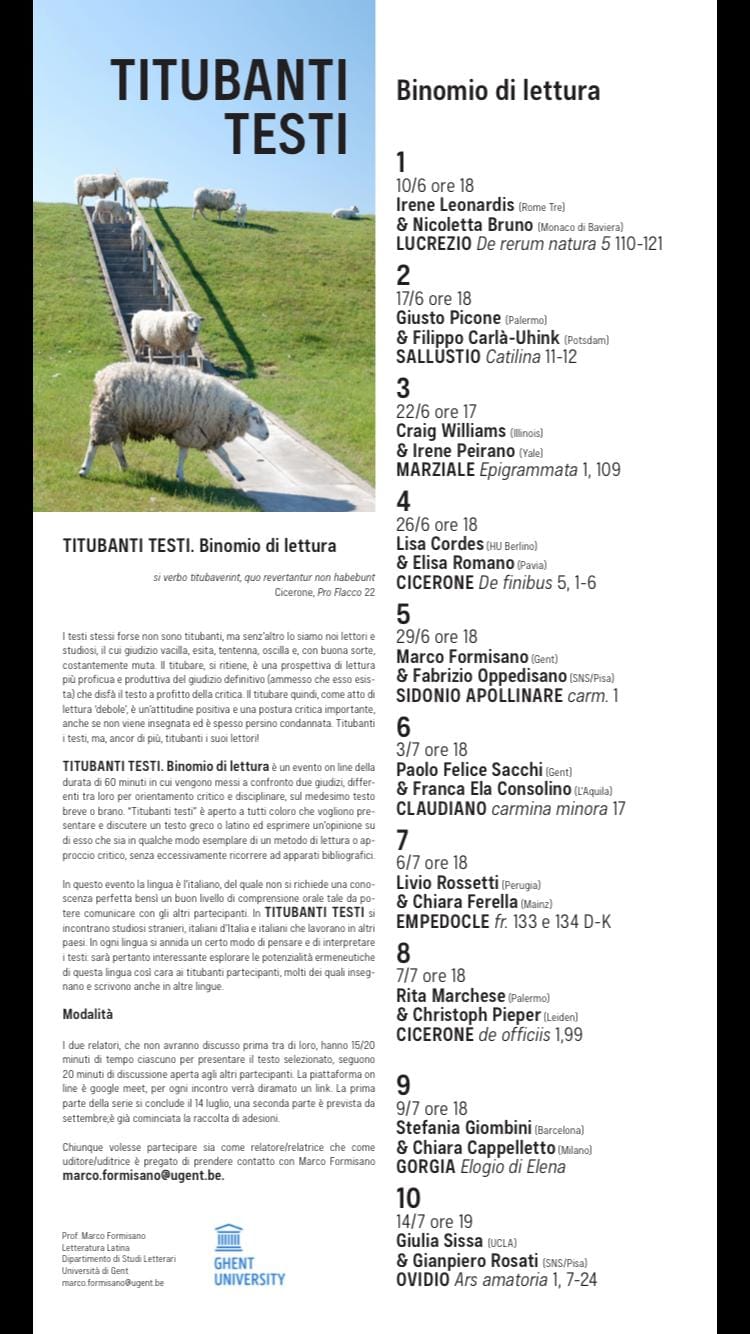 In a new article, Marco Onorato has identified Prudentius and Paulinus of Nola in Carm. 1. See Bibliography, tab 2019.

Abstract. In the preface to Sidonius’ panegyric of Anthemius the expression variae … hostia linguae (c. 1.29) discloses a contamination of lexical and thematic features of Prud. perist. 10 and Paul. Nol. c. 18. Starting from these allusive marks it is possible to reconstruct further elements of the poem’s Christian subtext, which brings out the ambiguity of Sidonius’ attitude towards the emperor.

Scott Kennedy has authored an article entitled ‘Winter is Coming: The Barbarization of Roman Leaders in Imperial Panegyric from A.D. 446-68’ in CQ June 2019 online

At the Scuola Normale Superiore di Pisa, Fabrizio Oppedisano is running a project on the emperor Anthemius. On 8 June, a symposium was held on the subject (see flyer). The project also includes a translation and commentary of Sidonius’ Panegyric (Carm. 1-2), to be published next year.