Click to download the list of deans of the Académie de Poitiers. Read his obituary. Read also Gavin Kelly’s blogpost (29.06.2016) ‘Vichy and the Visigoths’ on the Sidonius in Antiquity and Modernity blog.

For the problem of the Vichy regime and their instrumentalization of classical antiquity, see publications by Glaydson J. da Silva (University of São Paulo).

Christian Heinrich Christoph Lütjohann, classics teacher in Flensburg, Greifswald, and Kiel, professor of Classical Philology in Kiel from February 1884, born 1846, died April 1884, before he could complete his MGH edition of Sidonius. This was then finalized by the series editor Mommsen together with Bücheler, Leo, and Wilamowitz, and, for the indices, Geisler and Grupe. The work was published in 1887.

Click to enlarge
(For a collection of Schulprogramme, see also the Giessener Elektronische Bibliothek, here)

The spelling ‘Luetjohann’ in the MGH, albeit imitated in much scholarship, is exceptional, probably determined by its Latin context. The man himself wrote ‘Lütjohann’ according to his signature in his working copy (see on the left and below), which is also the form found in the Archive of Prussian Teachers (here on the left and online). For other instances of the correct spelling, see the Lütjohann article in Wikipedia, e.g.:
– the MGH (!) exhibition catalogue ‘Phoenix aus der Asche: Theodor Mommsen und die Monumenta Germaniae Historica’, 2005, writes ‘Lütjohann’: online;
– the catalogue of the German National Library prefers ‘Lütjohann’ (although the variant ‘Luetjohann’ is mentioned): online;
– Kössler’s Personenlexikon has ‘Luetjohann’ in the title of the entry to continue with ‘Lütjohann’ in its body;
– Richard Foerster [sic] in his 1885 obituary writes ‘Lütjohann’: online;
– in his articles in German his signature is ‘Lütjohann’ and also in the Latin (!) ones on Propertius and Apuleius: online.

This is a special working copy, withdrawn from the library of the Monumenta Germaniae Historica. It belonged to Lütjohann who worked at that institution on Sidonius when preparing his edition. It is a copy of Grégoire and Collombet’s 1836 edition, essentially reflecting his collations in Florence. The three volumes have white leaves bound between the original pages on which Lütjohann penned his findings, using different inks for different manuscripts:
black: Laurentianus 554 (M)
red: Laurentianus XLV, 26
dark blue: Laurentianus XLV, 23 (T)
crimson: Guelferbytensis 486 (clearly added later).

Paul Hermann Eduard Mohr, born 24 April 1851 Stendal (Saksen-Anhalt). Leaves Stendal grammar school in 1865 when in Obertertia, together with his elder brothers Hermann and Waldemar, as the family moves to Merseburg. Dr. phil. Leipzig 1873, classics teacher in Leipzig, Sondershausen, Laubach i.H., and Bremerhaven; headmaster in Bremerhaven from 1895, still there according to Schulprogramm 1909. 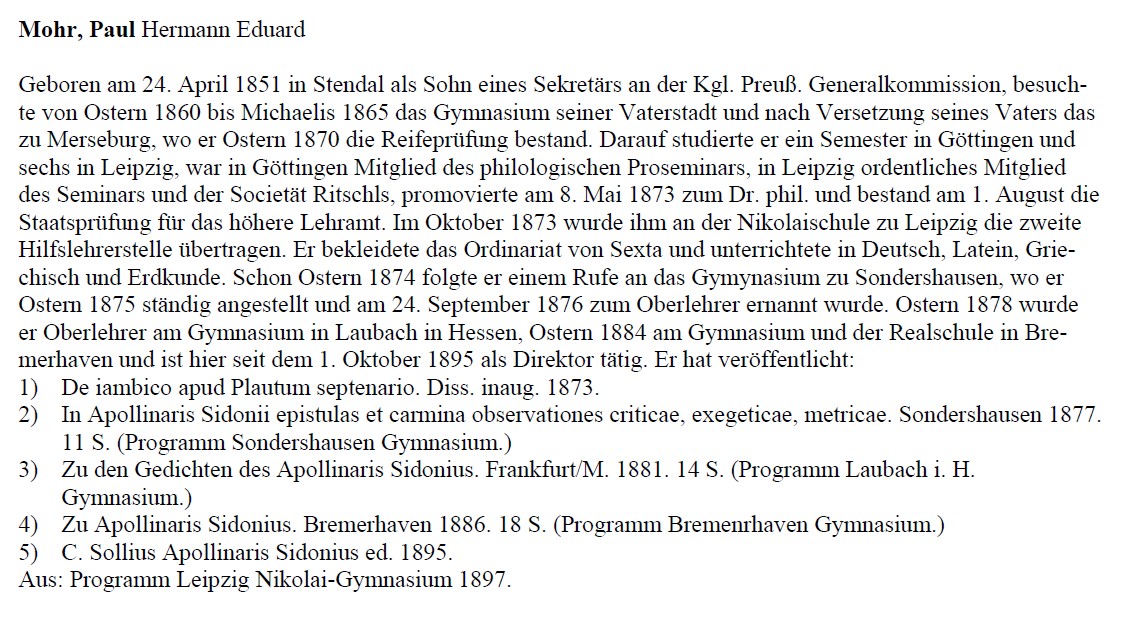 Click to enlarge
(For a collection of Schulprogramme, see also the Giessener Elektronische Bibliothek, here)

On 28 December 1874, Paul Mohr and Rosalie Engelhardt (born 27 March 1852 in Berlin) married in Merseburg; their daughter Paula Caroline Rosa was born on 7 September 1881 in Laubach in Hessen. The family moved from Laubach in Hessen to Bremerhaven in April 1884. From August 1891 to March 1918, Mohr’s home address was Bürgermeister-Smidt-Straβe 138, Bremerhaven (a stone’s throw away from the school), after which he moved back to Hessen, to Allendorf, Kreis Witzenhausen (nowadays Bad Sooden-Allendorf).

From 2 April 1918, the family lived in Allendorf, Bahnhofstrasse 18 7/8 (nowadays no. 13). Rosalie died in September 1926. In 1927/28, Paula, who was a painter, had a cottage built as a studio, Am Brauhaus 460 2/8 (nowadays no. 2). It was there that Paul died 26 November 1939 in the care of Mrs Auguste Fischer, who also took further care of Paula who was without income and sometimes paid invoices with paintings. At Paula’s death at the age of 71/72, the cottage was bequeathed to the Fischer family.

O.M. Dalton (1866–1945) was a British museum curator and archaeologist. Though very much an all-rounder, his main expertise was in medieval art. From 1921 to 1928 he was Keeper of the British and Medieval Antiquities Department at the British Museum.

His groundbreaking 1915 translation of Sidonius’ letters – the first complete translation into English – was reviewed for a general audience by T.R. Glover in The Times Literary Supplement 689 (1915) 107: “[Sidonius] is bad to read and terrible to translate. Mr. Dalton, however, has achieved it”. This review is indeed very illustrative of its time.

W.B. Anderson was born in Aberdeen in 1877 and attended Aberdeen University. In 1899 he was admitted at Trinity College Cambridge, where he was elected a scholar. He won the Browne Medal for Greek Epigram in 1902 and graduated BA with a First Class in the Classical Tripos in 1903. He spent the next three years as a Lecturer in Classics at Manchester University, before taking up the post of Professor of Latin at Queens’ University, Kingston, Canada (1906-13). He returned to Manchester in 1913 and served as Professor of Imperial Latin (1913-29) and then Hulme Professor of Latin (1929-36). Upon the death of A.E. Housman in 1936, Anderson was appointed Kennedy Professor of Latin at Cambridge, and was elected to a Fellowship at St John’s College. He held the Professorship until his retirement in 1942. Anderson published editions of Livy Book IX and the poems and letters of Sidonius Apollinaris, and wrote many articles and reviews concerned with the Latin poets, notably Virgil, Lucan, and Statius. He collected materials for editions of Lucan and of the second book of Statius’ ‘Thebaid’, but these remained unpublished. Anderson died a bachelor in 1959.

Persecution and a lost Sidonius index

A hitherto unknown name must be added to the pantheon of Sidonius scholars: Fritz Kretschmer. In the 1930s, Fritz Kretschmer, a Classicist and Romanist, pupil of Norden and Wilamowitz, composed the first-ever word index of Sidonius’ oeuvre. It got lost.

His biography which is as unexpected as it is tragic takes us from Berlin to Shanghai and on to San Francisco. An academic education in Berlin, the Nazi persecution of the Jews, the ghetto of Shanghai, a new start in the United States and the sudden death of Illinois professor William Oldfather mark a career that was defined by loss and hardship.

Were it not for the brutalities of the war and a dramatic accident, classical scholarship could have possessed a groundbreaking Sidonius index half a century before Peder Christiansen, James Holland and Bill Dominik published their indispensable concordances. The least we can do is honouring the memory of its author, Fritz Kretschmer.

Read the story here, with illustrations and two papers by Kenneth Abbott who inherited Oldfather’s archive.

p. xlviii lists William Hugh Semple (1900-1981) among the recipients of Housman’s letters. S. was a research student in Cambridge under H.’s supervision in 1925; his doctoral thesis ‘Quaestiones Exegeticae Sidonianae’ was approved in 1927, and published in Transactions of the Cambridge Philological Society, 1930. He was Professor of Classics in Manchester, 1937-67. See Ian Rogerson, ‘W.H. Semple: A Research Student of A.E. Housman’, Housman Society Journal 25 (1999) 70-72.

p. 27 in a letter from 1927: ‘Mr W.H. Semple, as a research student in this University, has been preparing for the last two years under my direction a thesis on the Epistles of Apollinaris Sidonius’.

p. 206 praises S. in a letter from 1930 for his research based ‘on full knowledge and conducted with great exactness’, overcoming ‘many difficulties in the letters and poems of Sidonius Apollinaris’, and thus being ‘a valuable contribution to the understanding of the author’.

p. 623 is a request to the Library in 1926 to waive the rule of no more than five books being lent out to a student, because S. ‘who is studying Apollinaris Sidonius under my direction […] finds that 5 books are not enough to work with and that the books he wants are not to be found elsewhere than in the Library. He is a graduate of Belfast, and has acted for three years as assistant to the professors of Latin and of English here.’

The entry for W.H. Semple in the Oxford UK Who’s Who here (access by subscription).

C.E. Stevens (1905-1976), known universally and affectionately to the College and the wider academic world as ‘Tom Brown’, was a Scholar of New College, Oxford, between 1924 and 1928 when he received his BA. He moved to Oriel College as Robinson Exhibitioner in 1928 and published Sidonius Apollinaris and His Age in 1933. He became a Fellow and Tutor at Magdalen College in the same year. Stevens served in intelligence during WWII, and is particularly known for producing a set of German language newspapers dropped behind enemy lines, of which Magdalen has a complete set of copies. He died in 1976.
| source Magdalen College Archive

See also Wikidata and Wikipédia; for his wife, the poet Leila Buckley, Wikipedia and for his membership of the Inklings, together with C.S. Lewis and J.R.R. Tolkien among others, gathering weekly between 1930 and 1949 in Lewis’ room in Magdalen College, the Oxford DNB and Colin Duriez’ The Oxford Inklings: Lewis, Tolkien and Their Circle, Oxford 2015 (Stevens on pages 172, 199, 235; ‘an Inkling gallery‘).

Further to his life and his final days in Devon in a blog post by a family friend, Tom Davies: ‘A Distinguished Scholar in Deepest Devon’, here (19.10.2020).

Sidonius Apollinaris and His Age was reviewed for a general audience by R.W. Moore in The Times Literary Supplement Issue 1654, October 12, 1933, page 689: ‘a sober estimate of the man and his historical significance based on a strict evaluation of the evidence’.